… That Reflected An Equally Awesome Spiritual Journey Inward To The Heart This is the story of Robyn Davidson.  Stories are the stuff of legend and myth, of fact and fiction, of scripture and holy books.  They are also the very fabric of our lives.  Stories can impart wisdom and knowledge, and even enlightenment when heard with the right ears. In this particular case, we have an amazingly great and wonderfully instructive story. Listen closely!

Did you know that a 28-year old Australian woman walked from deep in the Outback, just northeast of Uluru (also known as Ayer’s Rock), all the way to the Indian Ocean shore on the western coastline?  No, neither did we!.  Mind you, the sheer enormity and astounding difficulty of this achievement is as staggering as it is overwhelming to consider.  Nonetheless … … …

Robyn Davidson and her caravan of camels flowed liked a river through the desert … from Alice Springs to the Indian Ocean … snaking their way through the most forbidding terrain and inclement weather of the Australian Outback.  Her eventual arrival at the western shore, and full immersion in the ocean waters, seemed a perfect metaphor for the successful completion of the true spiritual journey.

“Just as a river, after flowing for a long time, merges in the ocean and becomes the ocean”[1], so, too, does the spiritual seeker merge with God upon completing their inner spiritual journey by attaining perfect Self-realization. 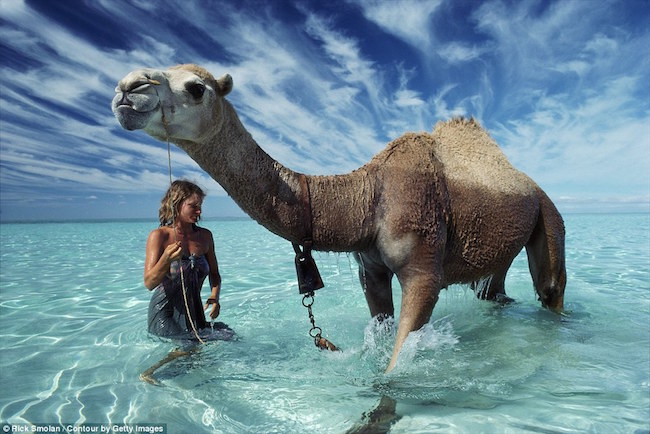 As Robyn continued on her outward trek over harsh lands, she was also travelling inexorably inward. It was this inner pilgrimage — every truthseeker’s own unique spiritual journey — which makes this ‘adventure story’ so inspiring and exhilarating, so magical and moving, so mystical and illuminating. Not in the history of modern movie-making has such an honest portrayal of one person’s Journey to the Heart been captured so poignantly and compellingly.

Persevering at every turn, pressing on in the face of any adversity, overcoming all obstacles, truly, Robyn walked the classic path of the spiritual warrior.  Challenging both body and spirit, trying in wild and unexpected ways, and forever demanding authentic responses, the desert outback tested her mettle as it tested the cohesiveness of her caravan.  Quite admirably she rose to each and every occasion*, by hook or by crook, whenever she had to in order to arrive at her final destination.

*Perhaps only one born with a Virgo sun sign could have meticulously cared for the desperate needs of each member of her team in order that all would survive, and eventually thrive.

Heart of the Journey

The heart of her journey, according to Robyn, was the 200-mile stretch that she walked with a wise and congenial Mr. Eddie, a Pitjantjatjara man.  This was apparently her time for baptism by fire in the desert, which only an Aborigine elder knows how to perform. Her personal account describes him as a desert sage — wily like a fox, strong as an oak, possessing the equipoise of a cobra and the bounce of a kangaroo. 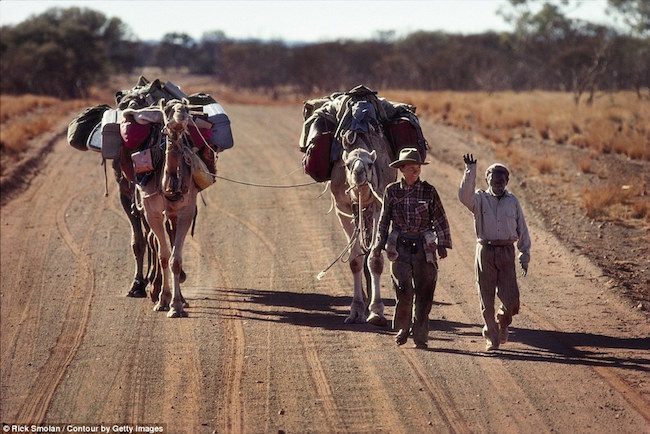 It is unlikely that Robyn was fully aware of what really took place during that outback awakening.  The aborigine communities far and wide knew of her comings and goings. They all reveled in the notion that an uninitiated white woman would have the raw courage and intestinal fortitude and rare gumption to make such a journey — ALONE. Only the Aborigine can do that … … … and survive the ordeal to tell about it.

Not only did Robyn survive, she wrote perhaps one of the greatest autobiographical stories ever written of successfully meeting nature on its own terms.  Especially in Australia was this extraordinary endeavor all the more remarkable.  A country known for it exploitation of both land and resources, at all costs, usually doesn’t have time for stories like these. Nevertheless, it was an exceptionally magnificent story which occurred right in its own heartland — the infamous Outback — and in the life of one of Australia’s own.

“One of the greatest displays of prowess, as well as spiritual unfoldment, of the modern era to make it to print, and very few even knew it happened.” Tracks: A Woman’s Solo Trek Across 1700 Miles of Australian Outback

Robyn’s book and historical account of her fascinating mundane and spiritual quest has rendered this extraordinary undertaking in a way that simply cannot be forgotten.  Her innocent yet determined meeting with each challenge that arose shows us the way in our own lives.  That she refused to allow any letdown or misfortune (there were many and they were severe) stand in her way serves as a glowing example to every one of us who has been discouraged — dishearteningly and overwhelmingly so — during the darkest moments of our sadhanas (read: period of spiritual practice). 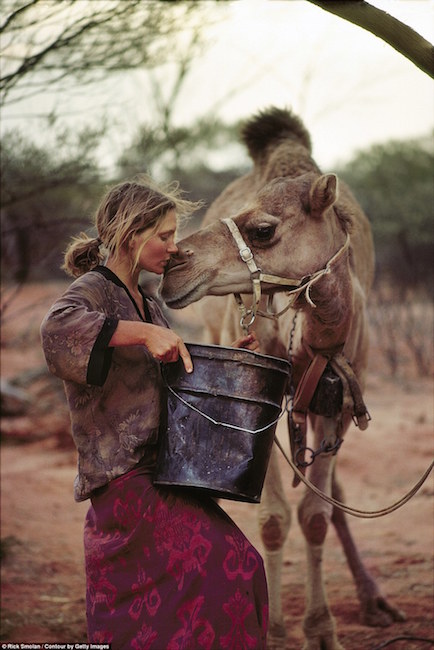 In the end TRACKS will survive as one of the 20th century’s greatest achievements by man or woman, on any continent, and during any season.  The climbing of Mount Everest pales by comparison, as do the first expeditions to both the North and South Poles.  So do any of the various and sundry Daredevil exploits or Ironman feats performed during the same 100 years.

That is because Robyn Davidson, known as ‘The Camel-Lady’, was uniquely conscious during her outer and inner journeys across 1700 miles of Australian outback in 1977. Whether she was aware or not, she was undoubtedly impelled forward by forces she went there to understand and master.  Confronting her demons, which would inevitably emerge in the stunning silence, total solitude and open hostility of the desert, is the challenge of everyone’s lifetime; albeit, not in such trying circumstances.  She compressed her Dark Night of the Soul it into a nine month trek while trying to survive in a veritable crucible of desert heat and thirst, outback discomfort and deprivation.

And survive she did.  Probably in a way that no other Aussie — man or woman of the Outback — would ever survive.  Talk about TRUE GRIT ! ! !   Robyn Davidson’s picture ought to be in the Online Idiom Dictionary, right next to “TRUE GRIT”. 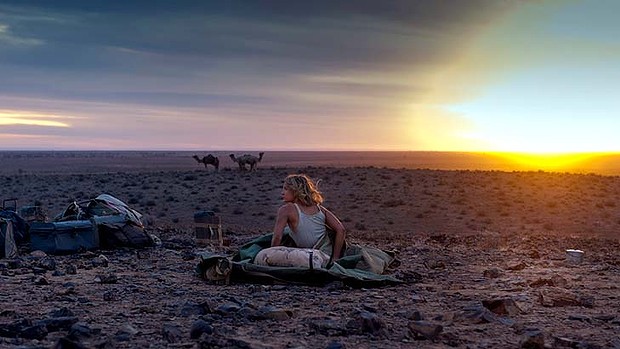 I saw the movie TRACKS during a very challenging phase of my sadhana.  My immediate response — to my Self —  was that if this 28-year old Aussie woman could successfully negotiate nothing less than 1700 miles through the daunting and dangerous Outback, certainly I could plod on in my own spiritual journey.   Through Robyn’s inspiring and sacred expedition, starting with the grim realities of Alice Springs to the purifying waters of the Indian Ocean, I was somehow provided with a new lease on life, especially my spiritual life.

Simply put, if she could accomplish, each and every day, what she had to perform to simply stay alive let alone advance through the desert wilderness, so could I move forward during this difficult period of sadhana.  Robyn’s tremendous endeavor to meet up with her true Self was not only edifying to see and empowering to feel, it has served as a unparalleled inspirational tale of overcoming.  Overcoming anything and everything, anywhere and everywhere; that is, in order to arrive — and merge — with the Ocean of Consciousness which awaits us all.

TRACKS was out of print for several years and could not even be bought in Australia. What else can be said except that a really neat Aussie woman upstaged all the tough and hardened cowboys in the Land Down Under.  She also put the mining companies to shame for exposing the terrible damage to the environment which they have inflicted over many decades.  On the other hand Robin Davidson did much to raise awareness about the plight of the indigenous Aborigines.  All the while she extolled their many virtues and revealed their unacknowledged contributions to Australian society.

Not only did Robyn’s voyage across the ocean desert end up becoming an unintentional yet searing social commentary on Australian culture, it re-aquainted the people with their wonderful animals, both wild and domestic.  The beautiful love affair which developed between her and her dog Diggity was as touching as it was exemplary.  Above all, the bonds that developed between Robyn and her beloved camels marked a turning point in the very pilgrimage back to her own Self.

Camels and kangaroos, dingos and snakes became Robyn’s companions throughout her trip.  They also became her adversaries from time to time which required the right response.  Desert living can be cruel and brutal.  However, there is a mutual respect that emerged among those who survive the desert’s extremes and harshness.  Seeing and feeling the wonderful web of life, which became more apparent with each day in the outback wilderness, was clearly one of her many treasured experiences.  In so doing she also provided an unprecedented opportunity for Australians to get to know their Outback, wild camels and all.

Most importantly, however, Robin’s awesome story provides an unrivaled vehicle for personal transformation and self actualization, particularly for so many young women who share her predicament in myriad ways.

“Just as a river, after flowing for a long time, merges in the ocean and becomes the ocean, when Kundalini has finished her work and stabilized in the sahasrara, you become completely immersed in God. All your impurities and coverings are destroyed, and you take complete rest in the Self. The veil which made you see duality drops away, and you experience the world as a blissful play of Kundalini, a sport of God’s energy. You see the universe as supremely blissful light, undifferentiated from yourself, and you remain unshakeable in this awareness. this is the state of liberation, the state of perfection.”

Tracks: The true story behind the film